Biometrics passkeys, iPhones as webcams, and an Apple-only full car dashboard were among features announced by the tech giant today. 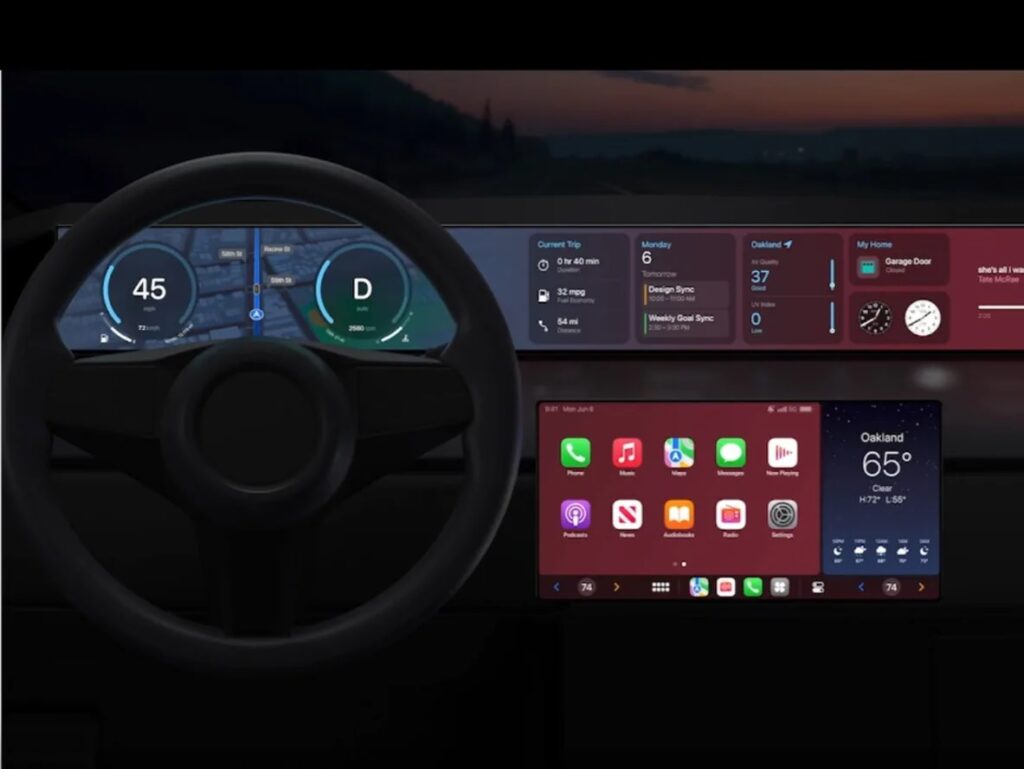 Biometrics passkeys, iPhones as webcams, and an Apple-only full car dashboard were among a long list of features announced by the tech giant today.

Apple is hosting its annual Worldwide Developers Conference to its developer community of over 34 million where the emphasis is on software updates rather than new phones or tablets.

Apple users around the world get to benefit from operating system updates – iOS16, iPadOS16, WatchOS9 and the new MacOS Ventura were all unveiled.

The company did launch some new hardware featuring a second generation of its Apple silicon processor, the M2, which it claims to be 18 per cent faster than last year’s M1. It announced a new MacBook Air and 13-inch MacBook Pros with the M2 chip.

Most of Apple’s two-hour keynote featured a long list of software upgrades, some highly significant. Instead of using passwords, users will create passkeys using biometrics – FaceID and TouchID. These are stored for each site on device and accessed using cryptographics.

Apple says the digital key works only for the site it was created for. It says it has been working with Google and Microsoft and members of the FIDO (fast identity online) Alliance to ensure passkeys work across platforms. Passkeys can be shared across Apple devices but are useless if stolen as they require your biometrics to activate.

Having no password and basing a passkey entirely on a hash of your biometrics is different to a password being backed up by face or fingerprint recognition on an individual device.

Another notable development is the coming ability to use an iPhone as a high-resolution video camera for Facetime, Zoom, Webex and Teams calls when using a Mac. You use an accessory (some being developed by Belkin) to clip the camera to the laptop with the powerful backside lens facing you. The phone connects wirelessly to a Mac and doesn’t require special software.

Apple says it is bringing centre stage to the feature, so an iPhone will keep a user in frame as they move. It will brighten your face and blur your background if required. The connected iPhone will use image processing to transmit two images, one being a deskview if you are presenting.

The most futuristic feature is the massive update to Apple CarPlay. On coming cars, Apple’s software display will span continuously across the front of a dashboard and include the main dash. But it’s not that far into the future, with Apple saying it has been in talks with manufacturers including Ford, Nissan, Volvo, Polestar, Land Rover, Porsche, Honda and Audi with the first vehicles to be announced in late 2023.

Apple also announced multiple-stop routing in an update to Maps in iOS16. Users can specify up to 15 stops on a route in advance and have that play out when they drive. It unveiled a more immersive ground level view in Maps with announced Sydney and Melbourne among cities receiving this particular updates.

Apple revealed it is entering the BNPL market with Apple Pay Later. Purchases can be split over four payments spread over four weeks without additional interest. It named Shopify as the first organisation planning to use it. Payments can be managed through the phone. The service is restricted to the US at this stage.

iPhone, iPads, Macs and Apple Watch all received functionality updates. There was no mention of Apple TV nor anticipated updates or previews of augmented reality and the much talked about Apple Glasses.

With iPhones, Apple is ramping up the functionality of the lock screen. Users can have multiple personalised lock screens, with a wider range of widgets and animated graphics. They can create locks screens with different widgets that are enacted by the focus feature, such as when working.

Notifications will roll in from the bottom of the display and they can be animated. For example, you might see how close your Uber is on the Uber notification itself without accessing the app.

In the Messages app, you can edit messages you have just sent, undo sent messages (a feature already in apps such as Instagram) and share content with your friends in messages using SharePlay.

The changes to Apple voice dictation are likely to be embraced by billions. Apple says dictation is accessed more than 18 billion times per month across the globe. Apple says it is making it easy to fluidly move between typing and dictation (useful when using specialised vocabulary and unusually spelt words). You can select a word using touch and replace it with voice.

The app can automatically add punctuation when using voice dictation. Copying and translating text displayed in photos is being extended to frames in video.

Australia is among countries to receive an update to Apple News which will allows users to follow their favourite sporting teams and receive news tailored to it. Apple says Australian sports such as AFL and NRL are included.

Apple announced updates to some of its stock apps. The Photos app will offer dynamic sharing – up to five people can contribute to the one album. Users can opt to have photos of any of those five shared automatically.

The Apple Home app is getting a design makeover, the Mail app is getting undo send and scheduled send capabilities, while Safari will let users share a group of tabs, for example if they are planning a holiday together.

The most significant iPad update is an easier way of moving between multiple open apps. They are displayed at left and can be easily swapped around and selected. Macs also get this update with MacOs Venture.

Apple announced new collaboration tools for iPad and Macs. Users can brainstorm on iPads with Free Form, building designs together with Apple Pencil and bringing in other types of files (eg PDF documents) to work on together.

Apple Watch will start to track your medications, vitamins and supplements and you can receive reminders to take them. You will be warned if Apple thinks a new medication you propose taking interacts with your other drugs or with alcohol.

Apple Watch will also help runners improve their stride by recording vertical oscillation, stride length and ground contact time, there’s a multi workout format for triathletes, and a much needed update to its sleep app that will separately display REM, core and deep sleep – as several competing products do.

Beta versions of the updated operating systems for iPhones, iPads and Macs carrying these changes will be available in July with completed versions rolling out in Q3/2022.

The conference continues this week.