David Murray’s still in a hurry after AMP 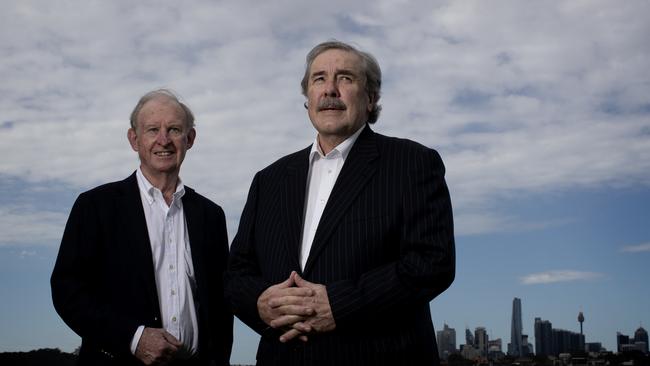 It’s eight years since David Murray was appointed chairman of the The Butterfly Foundation, the national charity for Australians impacted by eating disorders and body image issues.

In the past 18 months, the former Future Fund and AMP chairman and banker has never seen so much demand for its services, which aim to give any Australian suffering from an eating disorder access to affordable care.

“It is one of the worst medical conditions around and responsible for the majority of youth suicides for mental disorders,” Murray tells The Weekend Australian about one of the great passions of his non-corporate life.

“In our call centre we’ve had a 60 per cent increase in volume since the lockdown started last year. So it’s a very, very serious issue.”

Worsening mental health is the shadow pandemic that is following COVID-19 and the seemingly unstoppable spread of the Delta strain of the virus, which Murray says took the nation by surprise in 2021.

“We have had to pay the price for some degree of complacency, doing so well early on. It’s just a race now, lockdown versus vaccination … and then we live with it, I think, because there’ll be other strains in future. We live with it,” he says.

What now worries Murray, the longest-serving chief executive of Commonwealth Bank and chair of the 2014 financial system inquiry, is how governments work through record levels of debt and budget deficits, which he believes will require something akin to a “post-war reconstruction plan”.

Economists are speculating the failure to contain the Covid delta variant could cause the budget deficit to balloon to between $130bn and $140bn this year, a deterioration of up to $40bn or more than 30 per cent in three months.

“The issue will be now how governments work out in financial terms what’s essentially a war footing, where you have to issue so much debt to work through it. But you need a sort of a post-war reconstruction plan to work through that. It’s a bit early to know what that consists of at this point,” Murray says, noting a positive is that the national economy showed last year that once it frees up, it snaps back to its old reality quickly.

“The debt levels are substantial and the consequences of interest rates going back up can’t be overlooked. So there needs to be policy response to that in due course.”

For the first time in his life Murray is speaking without wearing a major business or government-commissioned hat, after decades of being at the forefront of Australia’s corporate discourse.

Most recently Murray was a controversial figure in his time as chairman of embattled financial services giant AMP.

He stepped down in August 2020 after the AMP board’s ill-judged decision to promote Boe Pahari to head AMP Capital, even though he had been the subject of a sexual harassment complaint by a female subordinate.

At AMP Murray made too many enemies inside and outside the company – especially key institutional shareholders – that lacked faith in his ability to return the company to its glory days as one of the biggest and most reputable figures in the wealth management sector.

Murray says he still has good friends at AMP whom he talks to occasionally, but has “left the company to its own devices” since he finished.

He stresses he has no regrets, despite the stain on his corporate reputation from two years as chairman.

“I think the objective was right. The size of the problem and the ongoing hurdles that we had to overcome were just so significant. That will leave some people with an impression, but there’s not much I can do about that. I think we had more than 40 board meetings in one year. That board and management were working at a feverish pace to try and get it right,’’ he says.

But he can’t resist another swipe at the Hayne royal commission into the financial services sector and what he has previously claimed was overreach.

“We walked into regulatory hurdles and a royal commission process which wasn’t run according to a serious version of the rule of law. It was a star chamber,” he says.

“It’s interesting, how many prosecutions there have not been since the royal commission. And how many reputations have been trashed? A lot of those people I know well and they are fundamentally good people.”

Murray has never held back in expressing his strong opinions, which has made him enemies. But so-be-it has always been his view.

These days the 72-year-old says he is enjoying being out of the limelight “doing his own thing” with his private investment company Lyndcote, which is also the name of the trophy residence in Hunters Hill, Sydney he shares with his wife Stephanie.

It has investments in a number of technology companies. One is an agtech firm; the founder of another has invented a new type of methanol-based fuel; but his favourite and the one he spends most time on is Charter Pacific Corporation (CPC).

The Queensland-based unlisted public company, founded in 1988, has had a chequered history and controversially delisted from the ASX in 2017. These days it focuses on biometric technology including mobile device security, credit card security and mobile payments.

Murray was a co-author of one of a family of patents acquired by the company.

In May Charter Pacific announced the first commercial licence of its biometric technology in the US when it reached agreement with a key player in the touchless ID space.

Charter Pacific would not name the company, but claimed it was using Charter Pacific’s suite of biometric patents to allow for quick and secure identity confirmations for its customers.

“It is a fairly large company. They recently raised a large amount of money for a listing in the US. They are in the health passport business but that is not their main business,” says Charter Pacific chief executive Kevin Dart.

More controversially, CPC has filed a claim in a US district court in Texas alleging patent infringements by tech giant Apple, involving its use of Touch ID and Face ID authentication on iPhones and iPads. Some patents date back to 2003. This week the case was filed in the Federal Court in Sydney.

CPC has also filed a claim in America against HMD, the company currently holding the rights to the Nokia phone brand, claiming infringements over a rear-mounted fingerprint sensor on Nokia smartphones in 2018.

Murray and Dart won’t comment about the legal cases except to say: “Charter Pacific is confident that its patents are valid and give broad protection.”

But the actions have led to allegations the company’s real business is so-called patent trolling: using patent infringement claims to make money. The most important distinction between a patent owner protecting their intellectual property and a patent troll is that the latter has no intention of ever using their patent to develop a product.

The practice is not illegal, but its critics argue such trolling extorts money from corporations that have to litigate or settle to allow them to launch planned products. Murray stresses CPC is of a different breed, given it is also pursuing additional patents in both the US and Europe that are complimentary to its current patent portfolio.

“We’re not just pursuing litigation. We are pursuing development of the patents. And we recently had the US Patent Office agree – that was last Christmas – to an extension of a further application of one of the patents. And we’re doing more work on that front – which is, by the way, an important rebuttal to the troll allegation,” he says.

“Then we’re pursuing licensing. We’re active on all those fronts. The one that gets the headlines is the litigation because some settlements have been large, but the others are just as important.”

Given the company’s history, there are many sceptics who claim it is doomed to fail. But Dart will hear nothing of the assertion.

“We’re confident that we are going to have success. I don’t tend to look for those reasons as to why it won’t work,’’ he says.

“Almost universally, I think, for important inventions in Australia, we are not a global manufacturer, we do not have scale outside the country. Inevitably, they are more valuable outside Australia than they are inside. And for that reason, there’s always a possibility that Australia can have its serious inventions undervalued,” he says.

He points to a firm like blood plasma giant CSL as an exception to the rule. More recently software firm Canva secured a staggering $US40bn valuation for its proprietary technology.

“Certainly there are some standouts. But putting an Australian best interest hat on, the important thing here is that there’s some benefit to this country. If people use the patents, infringe the patents and never pay for the right, then there’s not even any tax revenue accrued in Australia. So it’s terribly important to me that there’s some benefit in this country from this and that governments stay on that track in the way they make sure that the system enables small companies with important inventions to make progress,” he says.

Outside his dabbling in technology companies, Murray and his wife continue to have a keen interest in cattle farming.

Five years ago they spent millions of dollars expanding their burgeoning sheep and cattle farm in the upper Hunter Valley, again under the Lyndcote name. One deal saw them take ownership of historic Dales homestead in Merriwa in the far west of the Hunter region.

The homestead was originally part of Brindley Park, reputed to be one of Australia’s oldest sheep breeding establishments after it was founded by pastoralist James Brindley Bettington in 1838.

“We run Black Angus. We have brought in some of the best embryos from North America. Blood lines,” Murray says. He recently conducted the property’s first public bull sale.

He and Stephanie can’t wait to get back to the property once Covid restrictions lift.

“We have a decent-sized farm there with a manager on the site. It’s been really engaging doing that,’’ Murray says.

“We really enjoy it.”